I once worked with a woman who was having puzzling bouts of anxiety related to her wedding which had taken place nearly two years prior.  The anxiety was so intense it kept her up at night, scrolling frantically through wedding photos in an effort to reassure herself.

I had sensed in a single session that this woman had developed a chronic, unconscious habit of looking outside of herself to inform what her life should look like.  Her wedding was no exception.

After exploring the issue and connecting it to patterns present in childhood, I asked her to take a moment to imagine a very different day of nuptials for herself.  In this fictional wedding, she was to envision that she had thoughtfully chosen every detail based on her desires and preferences alone.

I wanted her to picture that she had crafted the entire day as an authentic expression of her and her betrothed.

She chose the dress based on how she felt when she was in it (#sparkjoy).

The menu was composed of her and the groom’s favorite foods.

The reception music was an endless audio reel of the happy couple’s personal power anthems.

You get the picture.

In this scenario she had fiercely guarded the momentous occasion from the noise pollution of current trends and unsolicited opinions of family and friends.

Then I asked her, “Had you done that, do you think you would be struggling with this anxiety now almost two years later?”

Upon analyzing a single event in her life, both the unconscious pattern and the path forward became crystal clear.

The wedding was simply a microcosm for how she had been charting the course of her life.

She may have been behind the wheel, seemingly making all the choices, but she was taking her cues from backseat drivers, left and right.  At every. single. turn.

You know how it feels to have backseat drivers, right?  How about as a way of life?

To make matters worse this beautiful woman was having anxiety about having anxiety.  She was continually judging herself for replaying the drama over and over in her mind’s eye, telling herself it was all so silly to feel this way.

Anxiety is not silly.  It is means something.  It is a messenger.  Your job is not to judge its presence in your life.  Your job is to listen for what wisdom it brings.

The conditions surrounding your experience of anxiety can point to your values.  Naturally, we get anxious about the things that matter to us.

A chronic, persistent loop of anxiety, however, can indicate you are living out of alignment with the truth of who you are. Somewhere along the way you shifted into auto-pilot and developed the mindless habit of hyper-vigilantly scanning the environment to inform your every move.

In today’s media-dominated culture, it’s easy to do.  There are literally millions of examples at our fingertips of how to do this thing called life.

AUTHENTIC LIVING DOES NOT HAPPEN BY ACCIDENT.  IT TAKES RELENTLESS CONSCIOUS INTENTION TO LIVE A LIFE ON PURPOSE.

For my client, her anxiety showed up as a warning signal.  To turn off the road, take a look at the map, and begin charting a course of her own choosing.

Wild ones, this is not a drill.  This is your life.

Recall a moment when you were struggling with anxiety.  See if you can single out some of the mind chatter enough to identify a backseat driver or two.  Get into the headspace of that moment in time and glance in the rear view.  Who was along for a free ride inside your mind?  Members of your family? Your peers? Your Pinterest feed? Celebrity culture?

It might be high time to kick some people to the curb and leave them in the dust. Because you – and only you – hold the blueprint of how your life is meant to be lived.  It is etched into your DNA.

Learning to trust your inner guidance system requires constantly clearing out the backseat drivers.  A practice Dr. Clarissa Pinkola Estés calls sweeping in her book Women Who Run With the Wolves.

Every character depicted in the stories in Women Who Run With the Wolves represents an aspect of your own psyche.  As you read each tale, you gain clarity surrounding the dialogue in your head.  You begin to understand that many of these voices are parroted messages you’ve internalized from the world around you.

Locating yourself inside a story is a powerful tool which allows you to identify the key players at work within you, so you can begin to parse out who you want in tow and who needs to start hitchin’.

The next time you find yourself inside of a tense moment, imagine yourself painstakingly crafting the outcome of your situation exactly as I instructed my client above.  Infusing each and every detail as a reflection of you, and you alone.  Intentional practices like this, when implemented often enough, can lead to the creation of a life far more inspired than you ever imagined.

And it is just one example of the wildish practices you will not only learn and master, but that you will receive continual support for as a member of Wildish Collective.

It’s time to get behind the wheel of your life!  Wildish launches next week (!!!) and I want you there as my travel companion.  I am so ready to support your beautiful unfolding.  Get yourself registered here. I create content, courses, and retreats that bring women together - to connect us and cultivate our wildish nature. As a licensed psychotherapist, fellow soul-seeker and meaning-maker, I want to inspire you and give you steps to get closer to your true self - to own your whole story and show up as the most unapologetic and authentic expression of you, in everything you do. Because a life well-lived, depends on it. 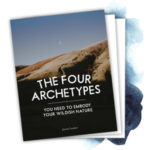 Get your copy of my free introduction to The Four Archetypes You Need to Embody Your Wildish Nature!

Want to own who you are, recognize your greatest gifts, and show up as
the real you in all areas of your life and in everything you do?

Learn everything you need to know about embodying your wildish nature
with inspiration and guidance dropped right in your inbox.

Sign up for my newsletter to receive your free introduction to The Four Archetypes You Need to Embody Your Wildish Nature!

Find out more or adjust your settings.

This website uses cookies so that we can provide you with the best user experience possible. Cookie information is stored in your browser and performs functions such as recognising you when you return to our website and helping our team to understand which sections of the website you find most interesting and useful.

Strictly Necessary Cookie should be enabled at all times so that we can save your preferences for cookie settings.

If you disable this cookie, we will not be able to save your preferences. This means that every time you visit this website you will need to enable or disable cookies again.